Its funny that sometimes we need to drop all triggers because we inputed a logic that will prohibit a particular code. In cases like this we can drop them all and later create them again. In database with plent of tables, 100 tables, its hard if we drop them one by one. So here is a script that can help you as it just did to me.

In some cases we may want to get from MSSQL list all SPs by its modified date so that we know what we or our college did modified last. Here is a query you may use

This query will return the SPs from the latest modified stored procedure. Its handy specially when your migrating SPs manually.

Do you have a hard disk that have a bad sector? Do you want to still use it but move the bad sectors to a partition in such a way you can still use the disk? Then

Repartition Bad Drive will repartion your drive in such a way it make all bad sector with some margins to be still on RAW format. That way you can still use the drive in multiple bit of drive, specially if it has a big capacity such as 1TB, and store some data that you which to store without purchasing anything.

Download it now from dposoft and the good of it, Its FREE!

May be your a developer that wanted to view your website from different countries. Yes in instance of DNS migration or just for the purpose of other troubleshooting needs.

May be your a developer that wanted to view your website from different countries. Yes in instance of DNS migration or just for the purpose of other troubleshooting needs. Then go visit LocaBrowser which enable you to visit your website in a max of 6 destination. Go there now http://www.locabrowser.com/ 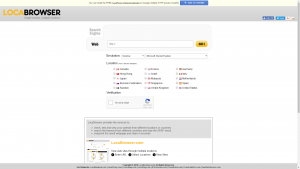 We recently had a problem with our Windows 10 to Install .Net 3.5 of Windows Feature when under Proxy. We found out that the installer of Windows has the said installer with it but needs to be triggered by the following steps:

There are times that we need to find something or search all records particular on an unfamiliar database in MSSQL.

There are times that we need to find something or search all records particular on an unfamiliar database in MSSQL. It is good to know how to query every item as a worst case scenario. I found this online which can help you, just like me, on looking unto a database that has no documentation.

DECLARE tables_cur CURSOR FOR SELECT TABLE_SCHEMA, TABLE_NAME FROM INFORMATION_SCHEMA.TABLES WHERE TABLE_TYPE = ‘BASE TABLE’

FETCH NEXT FROM tables_cur INTO @table_schema, @table_name

WHILE (@@FETCH_STATUS = 0)
BEGIN
DECLARE columns_cur CURSOR FOR SELECT COLUMN_NAME FROM INFORMATION_SCHEMA.COLUMNS WHERE TABLE_SCHEMA = @table_schema AND TABLE_NAME = @table_name AND COLLATION_NAME IS NOT NULL — Only strings have this and they always have it

FETCH NEXT FROM columns_cur INTO @column_name
END

FETCH NEXT FROM tables_cur INTO @table_schema, @table_name
END

Here is a quick snippet to apply jQuery validate to a form loaded via AJAX.

Then you can now check if it is valid via:

Did you upgrade to Windows 10 recently and your MVC website now have an issue under the development phase after it? Then maybe you also experience the same issue that affected your code on IIS. That is becuase Convert.ToDateTime utilizes the machine’s Culture(It changes when you use Windows 10 even you are using the same Country set) to parse a Date time. So to use it regardless of the Culture use the code snippet below.

How to Install ELMAH on your MVC Project?

I have been installing cordova on my work machine this passed days and I am really not happy when it failed because it can’t connect to the internet because our proxy is using AD Authentication. I have tried some NTLM proxy but its not working anymore. My alternative was to connect to the internet directly which is something that will work only when I am at home. Thank fully I found a working way to make it happen with a help from github gist.

Here is the modified steps:

Just a CAUTION your password is in plain text. So be reminded to remove it when your working on a multi-developer machine.

Service Oriented Architecture is an architecture that make all request bounded on a form of a Service such as APIs. It consist of three different layers as follows:

With this kind of architecture developer can make their application compatible to different platform such as Windows, Linux, and Mac OS. Some implementation of this uses some protocols such as OAuth which is implemented in different ways.

Seafile SSL/HTTPS on IIS was a very interesting journey when I was trying to implement such change as it gave me some interesting facts that I have notice not well documented. In this article we will assume that you have already installed a running instance of your Seafile on your Windows Server but was server via HTTP only. So lets get started:

Settings for your Seafile Server

Settings for your IIS Server

Are you like me who is managing a number of Windows Server? And might be maintaining multiple credential for each. I know its hard and you have the capability of saving the password. But remembering those server name or url is not that easy and I think this tool is right for you.

Microsoft has a manager for that and is called Remote Desktop manager. What it do is enable you to save your servers either per item or you may group them and also state a general setting and credential or even specify one for each.

Just like you I have wonder what are the difference between the three Source Code top kind Repositories that are available online. So I have decided to create this article to enlighten myself and others who are looking into the distinguishing difference of each so let get started.

GIT
Git is recently very popular with, you guess it right, github.com as it is offering an online free public source code repositories that everyone can use absolutely free. One of the best highlight of this kind of repository is that “Your CLONED repository is actually the repository that can cloned by others with the history along it”. Thats why when you are getting the source code you get it using the command GIT CLONE with the clone on the command.

TFS
We all know that its a Mirsoft product so most user of TFS are Micorosft entusiasth with Licenses at hand. One of the primary reason of choosing this repo server is that it is thighlt integrated with Microsoft product on Visual Studio and some Office Apps. It is also good to point that it is best to use if you are looking into a source control that is not easily unbinable from its source control. Unbindable that you may not easily remove the binding of the Source code from TFS, well at least that is from my experience.

SVN
Previously popular with most users as it used on Google’s Code website and has plenty of server choices that you can freely download and deploy on your on server absolutely free. It has the build in ability to Easily unbind your source code (EXPORT). Though the only downside is that the only source of truth is on the server unlike GIT which you may trigger your CLONED repo as a source of truth and might be a primary reason that some user move from SVN to GIT.

Well this are all based from my experience and some reading. But still don’t limit ourself on this items as there are also some reasons that is not indicated on this article that might be the triggering point of developers on choosing this kind of repository.

Since we need to have a guide for our teammate I have decided that instead of teaching how to install one by one to my colleagues I will create an online user guide so that any other person online that will be also looking for guide will also have the help that they need. So lets get started.

You may also want to take note the following update on the Environment Variable if it is needed on your side.

I have given a task to research on the web on how to disable RDP’s Copy and Paste of files due to some security issues. The following Steps should be done with Administrator rights.

As I am looking for an opportunity to serve our church thru a ministry, I was blessed to have it in such a way that it is align to my profession of creating website. With the team that composed of several persons I had volunteered to become the programmer. With the tools at hand I also used the same set of items and skill set in order to convert the provided design, concept, phases, and sections smoothly on http://www.gcf-east.com

It composes of several sections:

Soon it will host several videos and audible of sermon that will blessed visitors and will know God along with it.

Most of us who are using .Net as our Programming language use Signalr as our Real-Time Framework. And we implement OnDisconnect in most cases to catch clients that have been disconnected. Since then there were no parameter included as an Overload of the said method. Lately on the latest releases by the Signalr team they have included an Overload so that we can distinguish what triggers the disconnection and help us manage our Apps behavior to it.

With this said I have one experience that I want to share as this may also frustrate some people who are counting connected users and having a problem that when their app have multi workers (Web Garden) they app somehow always trigger OnDisconnect even if the user is still connect. So I want to share this findings on how to properly address it.

Let me highlight what is stopCalled is equal to true means.

Hope this instructions will help you manage your site as it help me on our projects.

I have been searching for an Open Source management of our church that is also created on ASP .Net. I have found RockRMS. RockRMS is created using ASP .Net Web Form that is so dynamic and Scale-able it can accommodate both external website and internal operation of a Church. There is even a dedicated hosting that will maintain your system and is hosted on Windows Azure.

Its source code is also available on GitHub so others can contribute to the pipeline. You may visit their website at https://www.rockrms.com/

Here are some of the screenshots provided on their website:

.NET Wrapper for WkHtmlToPdf DLL, library that uses Webkit engine to convert HTML pages to PDF. It is now available on Nuget for easy installation on your Visual Studio Solution/Projects.

How easy is it to use? Just install it via Nuget and add a reference on your code then use either one of the following:

A Microsoft Certified Solution Developer who is currently working as a Lead Developer at Winrock International with project ranging from ground-up web applications to creating data marts. He is also the Co-Founder and Core developer of icttech that caters projects from various clients. Recently he founded the LoadToCash that help individual convert their load to cash.